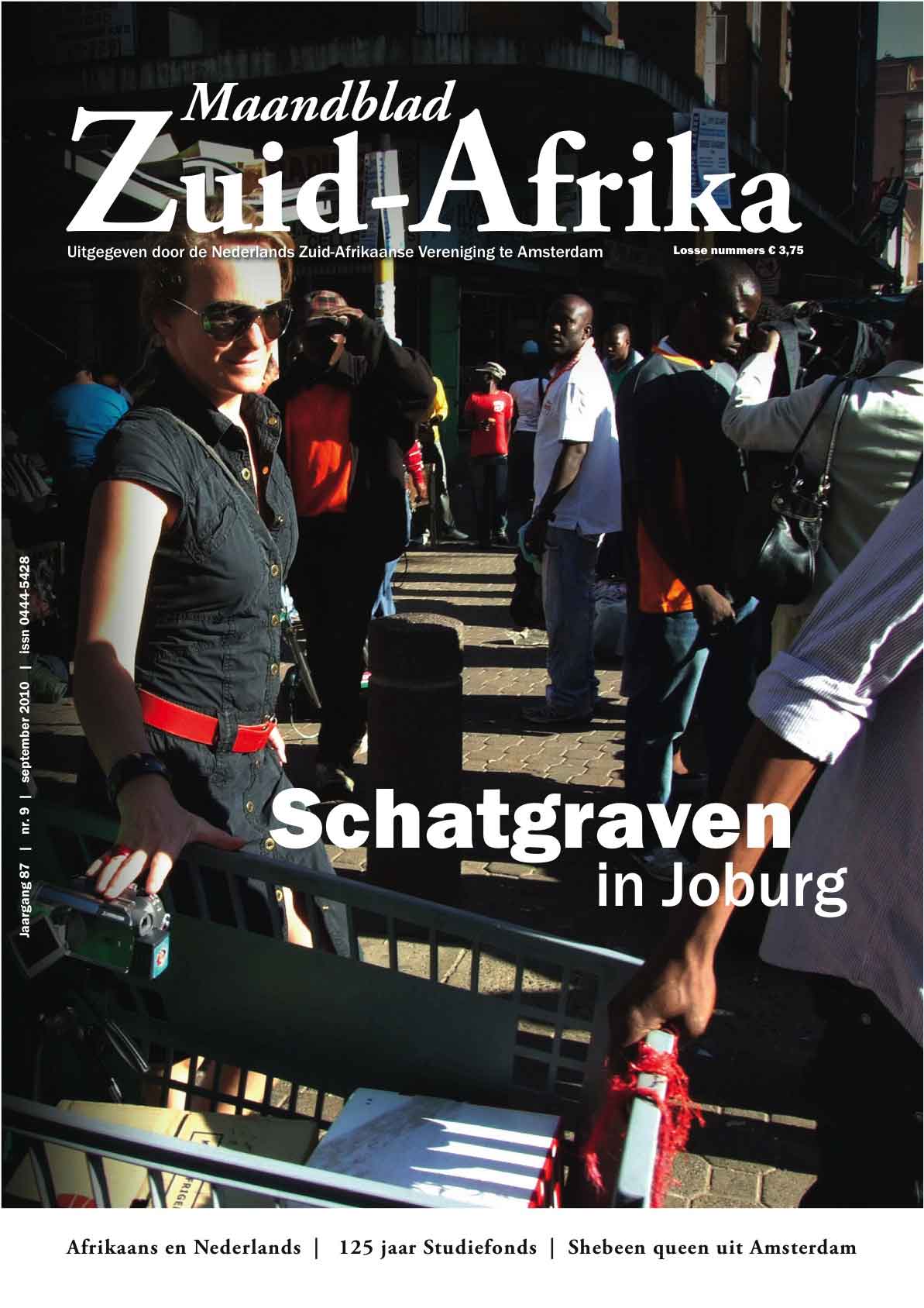 During the first three months of 2010, Dutch visual artist Su Tomesen lived and worked in Johannesburg as an artist-in-residence at the Bag Factory. There she created a shebeen – a township bar. ‘Because I like to do work on local topics. And because a shebeen is an integral part of daily life in Joburg.’
Tomesen’s idea to build a shebeen met quite some scepticism. People wondered whether a white, foreign woman would be able to create a lifelike shebeen. Tomesen proved them wrong. She created an installation which was operational for eight days. ‘It wasn’t really a shebeen,’she says, ‘it was my shebeen’. It turned out to be a dynamic work of art of which spectators formed the key elements. A work of art which was constantly changing and evolving.

Tongues wagging
Su Tomesen studied history at the University of Utrecht and fine arts at the world-famous Sandberg Institute in Amsterdam. For the last ten years she worked around the globe as a video director and a visual artist. But she never got to go to South Africa, the land of Nelson Mandela (‘One of the icons of international pop-culture’). That is, until the beginning of 2010, when she had the chance to work for three months at the Bag Factory Artist’s Studios in Johannesburg on a stipend from the South African National Arts Council.
Tomesen is a keen observer and has the ability to get to know her surroundings quickly and intimately. The pictures and texts she uploaded to her blog during her stay in Johannesburg, bear witness to this. They cover a broad range of subjects, from typical South African sms-language to modern shopping malls and street hawkers, from rural Mpumalanga to the nr. one South African tourist destination, Cape Town.
One of her colleagues at the Bag Factory, Senzo Shabangu, showed her around Johannesburg and its black townships. Tomesen: ‘Most of the time, I was the only white in Soweto. But if we went out to eat in a sushi bar in the city itself, Senzo quite often was the only black. That really had some tongues wagging ... not an ideal situation, but on the other hand it was kind of interesting. It gave me lots of food for thought.’
Shabangu took Tomesen along to a couple of shebeens. And that’s where her fascination with these township bars -most of which were illegal during apartheid- originated. Three months later, when she ended her residency at the Bag Factory with an exhibition, she built her own shebeen and became the first ever Dutch shebeen queen.

City One Minutes
The Bag Factory was founded in 1991 in order to offer young (predominanty black) artists entry to the commercial art markets. Since then it has grown into a well-known and reputable institute. Four times a year three foreign artists are given the opportunity to work at the Bag Factory for a period of three months. These artists-in-residence are expected to exhibit their work before returning home and, furthermore, to take part in Outreach Projects.
Su Tomesen’s project consisted of making a series of 24 one-minute video portraits (each portrait representing one hour of the day) of Johannesburg. These were part of the so-called ‘City One Minutes’, an international art project which to date has already resulted in the making of over a hundred city-portraits all over the world.
Tomesen is no stranger to the project. She made ‘City One Minutes’ on a.o. Buenos Aires, Rio de Janeiro, Port-au-Prince and Beijing. ‘I like one minute, one shot,’ she says. That’s apparent form her one-minute video called Muscles, recorded between 24:00 and 01:00 in a shebeen. It shows a couple of men shouting and dancing enthusiastically to the tones of this Diana Ross song. The contrast between the fixed camera position and the dynamics of the dancing men results in surrealistic images. It almost feels as if human behaviour doesn’t affect the shebeen -which symbolises the big city- at all. But whether that was the artist’s intention? Tomesen: ‘Art is all about asking questions. Not about answering them.’

She’s skinny!
Back to Tomesen’s own shebeen. Some critics said she was ‘too white’ or even ‘too skinny’ to be a convincing shebeen queen. However, criticisms like this are most probably due to the fact that shebeens are not ‘fashionable’ in the South African art world anymore. That’s why it simply had to be a foreign artist who dared to tackle this theme again, according to the prestigious magazine, The South African Art Times. Tomesen did an excellent job. Her installation was a vibrant, living work of art. A happening. And that’s what all shebeens are: happenings.

Gold digger
Su Tomesen has become an enthusiastic ambassador of Johannesburg in her own home town Amsterdam. Two weeks after her return to the Netherlands she uploaded her last picture on her blog, a street scene depicting two boys dragging a gigantic blue, plastic bag through a Johannesburg street. ‘I miss you, Joburg’, she wrote, ‘Crazy, bustling, vibrant, happening, lovely city’. Just how much Su Tomesen loves Johannesburg, can be seen and experienced at her solo exhibition “Gold Digger in Joburg’ from 3 September till 22 October 2010 in the ‘Zuid-Afrika Huis’ in Amsterdam. 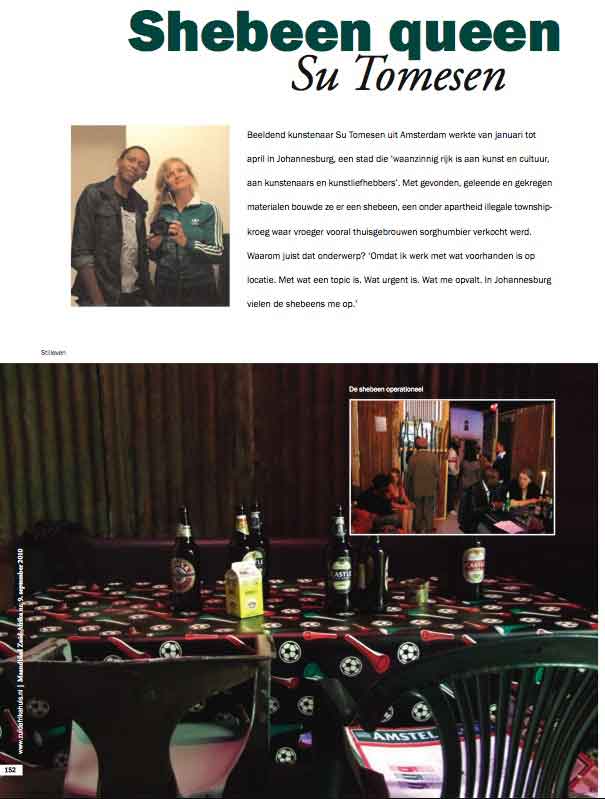 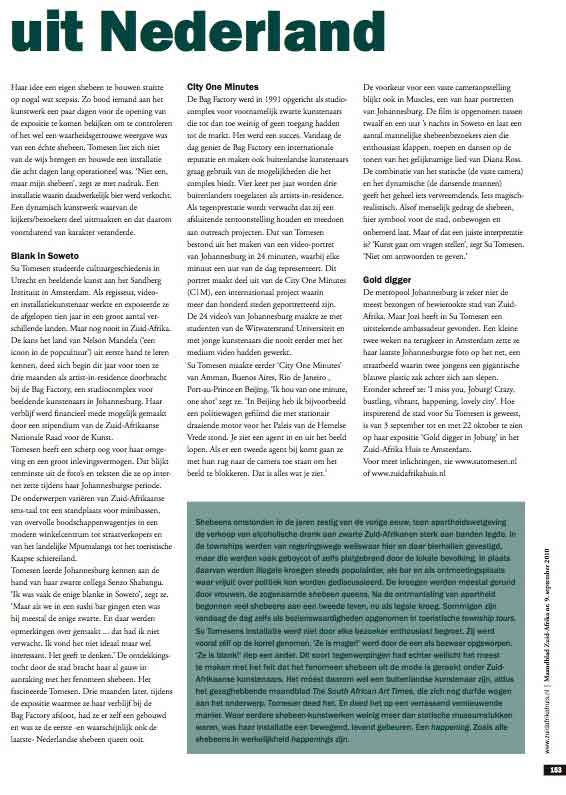