Learning economics under a tarp
2016
By Sandra Smets

[Dutch text at the bottom]

Yogyakarta, five pm. A street trader is seen pushing his cart, painted a bright green to stand out in traffic. It produces a tinkling sound, so as to be audible in these crowded streets where everyone is on their way to somewhere else. But actually, not everyone is. The sidewalks and streets appear to be the destinations of entrepreneurs such as this vendor, laying claim to curbs and parks. That's where they park their pushcart stalls or install their wares on the pavement - snacks, cosmetics, gasoline, or discarded tires being polished on the spot by self-proclaimed craftsmen deepening the grooves with their knives. All that merchandise is offered by inventive organizing of materials and space. A few boards become benches to form a terrace next to a cart. A powerpoint hung between two branches feeds flickering lightbulbs and enables an outdoor kitchen. Among all this, the dealer pushes his green cart, looking for the right place to stop and attract his own customers.

These are the first images of ‘Jalan’ (Indonesian for 'street'): a film about street trade in Yogyakarta made by the Dutch artist Su Tomesen. She worked on this thirty minute film for three years. Every scene and act in it shows care and logic, nothing is wasted, everything has value. On which day certain shots were taken is not mentioned because Tomesen doesn't find the dates to be relevant - a remarkable statement for an artist who is originally a historian. That timelessness  is how she experiences living on Java, every day being the same as the day before or after - as if the world were scripted like the Truman Show, she said in a telephone interview. Tomesen knows what she's talking about because she lives most of her time with her family in Yogyakarta. They built a house designed to combine inside and outside - in a way similar to the life in public spaces that has up until now been the main topic of her work as an artist.

Or to be more precise, it has been her main topic since 2008. That year she started traveling through Jordan, Syria, Lebanon, Oman, Palestine, Israel. Two years later she flew to Johannesburg and gave a workshop in Uganda. Just before ,that in 2009, she had gone to Port-au-Prince, Rio de Janeiro and Buenos Aires to film 'one-minutes', the short videos that offer a short window onto the world, as her work always seems to do. That cinematic window can also be seen in the Erasmus Huis, a short film of a barber on the street in Johannesburg, his salon just as basic but just as adequate as the places of business of street entrepreneurs in Jakarta, Beijing, Medellín and other such places. Four poles plus some canvas suffice to appropriate public space,  life blending into the big city . This is the dynamic to be found in the exhibition 'Jejak, kreativitas tersembunyi di tempat umum' (Traces, Hidden Creativity in Public Space). The traces mentioned in the title are details framed by Tomesen from the apparent chaos of public life: chairs, booths, trading, an improvised life of tarpaulin and pieces of stone as a jagged backdrop the ongoing citylife in non-Western countries.

All these images she divides into separate photo series, for example one of architectural images. This series shows the architecture built up between existing buildings, up and sideways, incorporating trees, spiraling upwards onto terraces each one slightly larger than the one of the floor below. Shelter built just anywhere possible, air conditioners squirming out of walls. Just like the way street traders in these cities claim sidewalks, so can architecture claim space in a world without official architects or construction supervision.

This ingenuity, unseen in over-regulated Europe, is the setting for all Tomesens films and photographs. Chairs, the mainstay of many Western product designers, are viewed differently by the denizens of this place. Her photo series on seating showcases duct tape as a means to provide second, third or fourth lives to discarded plastic chairs. Sloping streets are no problem, one can balance benches by cutting of parts of legs. If tables are needed, a piece of plastic on a tree stump will do just fine. This Heath Robinson world returns in her pictures of unintended 'installations': merchandise displayed and built into ingenious forms. Towers of boxes become centerpieces in markets, surrounded by smaller packages and goods. With just a cask sellers create complete displays: toothpaste tubes inside branch out into flower shapes, the exterior fully covered with pillstrips. In addition to the functionality, Tomesen shows the beauty that lies in the ingenuity, jewelry created by beads on stools.

By framing these details Tomesen shows those tableaux vivants as related to art performances and installations. A green handcart between leaves: color on color. Square cardboard boxes next to a display of square tiles: shape by shape. This artview has been a characteristic of Tomesen’s work for a few years now. After studying history, she worked as a television director and made films that found their way into film festivals and art spaces. More than ten years ago she enrolled in the Sandberg Institute, where her fellow students had been trained as visual artists. Film and video would continue to be her media, but she also started making interventions in (semi) public space. In Medellin she built a structure from bamboo, in Johannesburg she opened a bar, fully operational, which started a dispute. In the apartheid era this kind of bars was not considered appropriate for someone of her color or for a gallery either. ‘Jalan’ and also the photos in the Erasmus Huis do touch on politics as well: Tomesen points her camera deliberately not at the haves but at the have-nots, who cannot afford ready-made solutions but have to rely on their own resourcefulness. By this focus, Tomesen manages to compare cities worldwide: her photographs from Beijing, Tirana, Medellín, all depend on each other. Because this power is universal.

Thus a general definition of urbanity emerges from her work. A city can be defined as a place with opportunities for everyone to grow. Cities are where the powerless can develop the story of their lives, can write their own histories. Music, clothing, art and the coexistence of different cultures are the building blocks of cosmopolitan cities. Sociologist Saskia Sassen has defined the city a complex but incomplete system that survives other systems (kings, companies). Cities have seen kings and leaders come and go, but remain afloat themselves.

Africa, America, Eurasia or Australia: cities are the epicenters where new developments begin and yes, they are also where excesses such as poverty are found. The city is where it all happens. Thus, and this is our task for the future, we need to examine city life and particularly city life outside the West. At present when the rich are getting richer and the poor get poorer, divisions in cities are growing sharper. In many western cities municipalities seek the solution to problems in gentrification, by supporting trade and businesses that attract those with higher income, but that excludes and expels the poorer population. And so increases the problems.

Therefore Tomesen’s work is a visual plea for a world where organic life evolves freely and where waste hardly exists. Do not establish coffee shops or luxury homes but make room for those who already live in urban territories and try to survive. If you grant space to individuals instead of internationals, their capital can flourish and they themselves can be developers. That way poorer countries can bloom without investors but by using the informal economy as an engine. Underlining that power is why small entrepreneurs are the main subject in the fourth photo series of Tomesens at the Erasmus Huis. In her opinion their ingenuity can be a lesson for the West as well, where plans dropped into stupor by the recession in 2008. Many believe that big capital business or government can not break the deadlock. Tomesen shows a life that blooms by means of small capital. Cities that are less affected by an economic crisis, are the more autarkic organized ones, where local production chains are a closed system, without dependence on external capital. This means that the economic challenge of the 21st century is not to be found in growth but in shrinking. Towards a human level.

This bottom-up look Tomesen has mastered, by way of taking an interest: asserting that these objects are of  interest , that they be placed onto a pedestal – which she does quite literally. The type of objects to be seen in ‘Jalan’ return in this exhibition as readymades, on pedestals. Including: a gasoline seller’s rack, a tower of bottles, a homemade bench, a makeshift street lamp with roof. Matching these recycling techniques, she also shows a collage of plastic bags she made herself back in 2007, covering one of the windows of the Erasmus Huis and so filtering light inwards through beams of colors.

All this combined tells of spontaneous economies in a growingly globalized and urbanized world. Tomesen’s message lies in the richness of the mind caused by material poverty. To emphasize that this resilience exists worldwide, ‘Jalan’ eventually will become part one, of a four-part film chronicle. Part two she will film in Tirana in May 2016. Followed by part three and four respectively in Medellín and Johannesburg where she has already done research in the past. The parts are to be compiled into a DVD box,to be issued in 2017 or 2018.

Meanwhile, city life continues without much distinction between today and tomorrow, as Tomesen experiences herself while living on Java. Every day seems to be linked to the previous as well as to the next, again and again, without much difference. While pushing his green cart, the trader in ‘Jalan’ passes his competitors installing their trade on pavements and tarp poles already being hammered into the curbs. Shelters of bamboo are lashed together. Traffic hurries by, the pavements get swept, the sun goes down. Around midnight, all goods are packed again under the light of a single bulb of a temporary power supply. Time to sleep. Tomorrow is a new day.

----About the author
Sandra Smets is an art historian and freelance journalist based in Rotterdam. She writes for NRC Handelsblad, magazines and artist catalogs about contemporary and older visual arts with a special interest in art in public space. Recurring subjects are postwar monumental wall art and its demolishment, as well as short lived younger public art movements. She has written books and articles about Europe’s largest and most forgotten land art, about the impact of pre-war avant-gardes in post war city planning of Rotterdam streets, about light art in cities and festivals. Her essay on citizens’ initiatives and the political significance of monuments was granted the 2012 Hans Baaij Essay Prize. 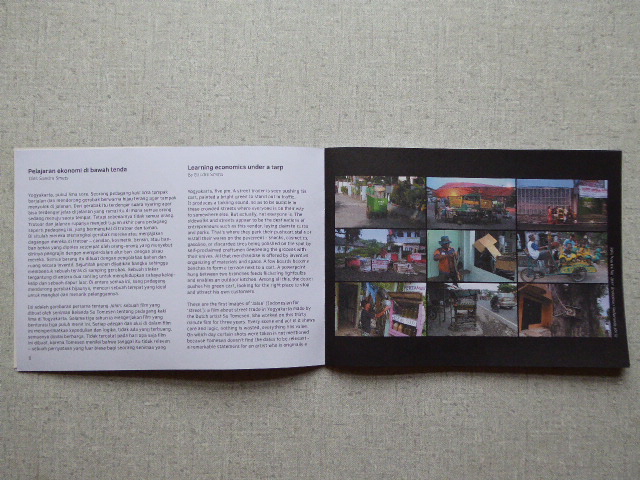